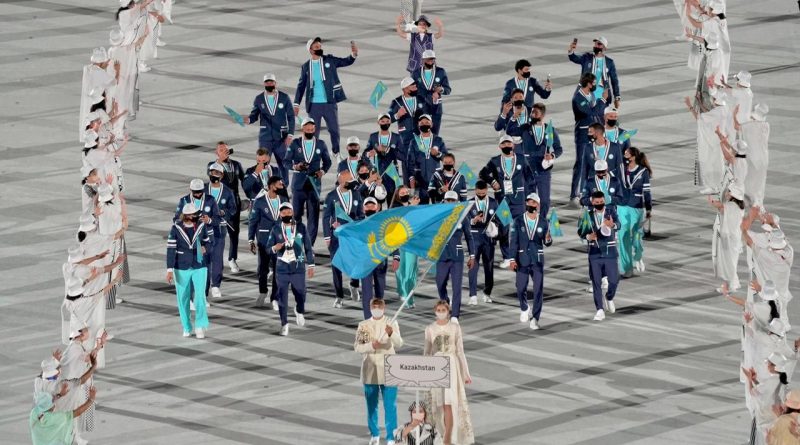 Nur – Sultan, The Republic of Kazakhstan won the second bronze medal at the 32nd Summer Olympics in Tokyo, which started July 23 and will run until August 8, while Kazakh President Kassym-Jomart Tokayev pledged to develop mass and youth sports as a government priority, stressing his confidence that Tokyo Olympics will show their record results and enhance Kazakhstan’s standing Among the participating sports forces.

As the Olympic Games continue, Kazakhstan already has two bronze medals in its bucket. Yeldos Smetov, 28,  who competes in the under 60-kilogram weight division, took the bronze medal after beating Tornike Tsjakadoea of the Netherlands. Smetov is a silver medalist from the 2016 Rio Olympic Games.

His Excellecny Kassym-Jomart Tokayev the president of the Republic of Kazakhstan said, the Olympic Flame, which will be lit in Tokyo at such a difficult time, will become a symbol of the fight against the pandemic for all mankind. The President noted that long lockdowns in almost all the countries have caused a sensitive blow to the usual rhythm of life.

“Each of you had to show a real champion character in order to strengthen your leadership positions at the international level and get the coveted Olympic licenses. In these difficult conditions, you rigorously followed the strict sports regime of self-restraint, setting a positive example of responsible behavior,” he said.

The President has no doubt that the powerful energy support of Kazakhstan people will be following our athletes throughout the Olympics.

“In the year of the 30th anniversary of Independence, the places on the Olympic podium will become not only your personal achievement, but also the triumph of the entire nation. They will inspire thousands of young hearts to play sports, lead a healthy lifestyle and firmly follow their goals,”  Kassym-Jomart Tokayev stressed.

In his speech, President Tokayev named the development of mass and youth sports as a priority:“It is on this basis that we will improve the health of the nation and bring up a new generation of Olympic athletes – sports stars that the entire country will be proud of. Such a policy will give a powerful impetus to the development of sports sections and yard clubs, creating real incentives for children’s coaches and helping identify a new group of gifted athletes,” the President believes.

Kassym-Jomart Tokayev expressed confidence that our athletes will show their record results in Tokyo and strengthen the country’s position among the sports super powers.

The Head of State also highly valued the coaches contribution to Kazakhstan’s achievements in sports. According to him, behind every athletes’ triumph is the painstaking, selfless work of mentors, who often remains outside the spotlight and cameras.

During the ceremony, for the first time, Kassym-Jomart Tokayev handed over the National Flag of Kazakhstan to two flag bearers – Olga Rypakova, Olympic champion in triple jump and Kamshybek Kunkabayev, silver medalist of the World Boxing Championship.

On behalf of the National Team, Olga Rypakova expressed gratitude to the President for the warm welcoming and good wishes.

“Your speech is a powerful support for us. We feel the genuine love of our people, and understand the responsibility entrusted to us. We will make every effort and skill to honorably represent our Motherland,” Olga Rypakova said.

Kazakhstan won its first medal at the Tokyo Summer Olympic Games underway in Japan, Sports.kz reported. Kazakhstani judoka Yeldos Smetov clinched bronze in Men’s – 60 kg event. Kazakhstan is ranked 19th in the overall medal tally of the Tokyo Olympics along with Estonia, France, Indonesia, Mexico, Mongolia, Slovenia, Switzerland and Ukraine. China dominates the overall medal standing with three gold and one bronze medals. Ranked second is Italy. Japan rounds out the top 3 with one gold and one silver. South Korea is placed fourth with one gold and two bronze medals.

Kazakh track and field athlete and flag-bearer Olga Rypakova amazed the viewers of the 2020 Summer Olympics (Tokyo 2020) opening ceremony on July 23. With her stunning hand-embroidered outfit and charming personality, she was recognized as the main stand-out character at the ceremony.

International fans from Japan, Korea, China, and other countries left their compliments and positive reviews about Olga’s fascinating appearance on the official social media accounts of the National Olympic Committee (NOC) of Kazakhstan.

Some of their comments on Twitter and Instagram read, “Princess”, “Gorgeous”, “Goddess”, “Beautiful”, The most beautiful woman I’ve ever seen.”  Some people added that Olga and her beautiful face reminded them of the famous Japanese computer game character – Lunafreya Nox Fleuret from Final Fantasy XV.

Many Korean fans wrote that “no matter how far away and different we are culturally-wise, we still see everything with the same eyes (the same way),” commenting on Olga’s natural beauty and her amazing costume. International fans also shared encouragement for athletes of the Kazakhstan team and expressed their desire to visit Kazakhstan someday.

Olga Rypakova is a London Olympic Champion and a prominent track and field athlete. Born in Ust-Kamenogorsk, she switched from heptathlon to triple jump in 2007 and began with great success after scoring two golds at the 2007 Asian Athletics Championship and 2007 Summer Universiade.

This year, following the recommendation of the International Olympic Committee to maintain gender equality and gender-based balance, for the first time each participating country was represented by two flag bearers – both male and female. The NOC announced that since two flag bearers would become the “faces of Kazakhstan” they wanted costumes to represent the authenticity of the nation’s culture and attract the attention of international viewers from all around the world.

Olga was wearing a silk long-sleeved white dress and a traditionally styled jacket – a camisole made from organza and hand-stitched with embroidery thread, beadwork, rhinestones, and sequins. Another flag-bearer Kamshybek Kunkabayev’s outfit included pants and camisole made from wool blend fabric and a hand-embroidered headscarf.

Kazakh designer Saltanat Baimukhamedova, known for her brand Salta, is the creator of the dress uniform that will be worn by athletes during the opening and closing ceremonies. The athletic uniform was manufactured by the Spanish company Joma.

The legendary Roza Rymbayeva, famous composer Renat Gaisin, the group Ninety One, Marsel, Ali Okapov, Aidana Medenova, Karakat Bashanova, DinaYa and Madi Syzdykov took part in creating the song “Arnau”. The song is based on the anthem of the National Olympic Committee of Kazakhstan, with music by Renat Gaisin and lyrics by Miras Kadyrmurat. The anthem’s refrain is also used in the dedication to the Olympians. Apart from them, Ali Okarov, Batyrkhan Malikov, Daniyar Kulymshin and Azamat Ashmakyn had a hand in creating the music of Arnau. The lyrics were written by Daniyar Otegen, Dulat Mukhametkaliyev and Alexei Maklay