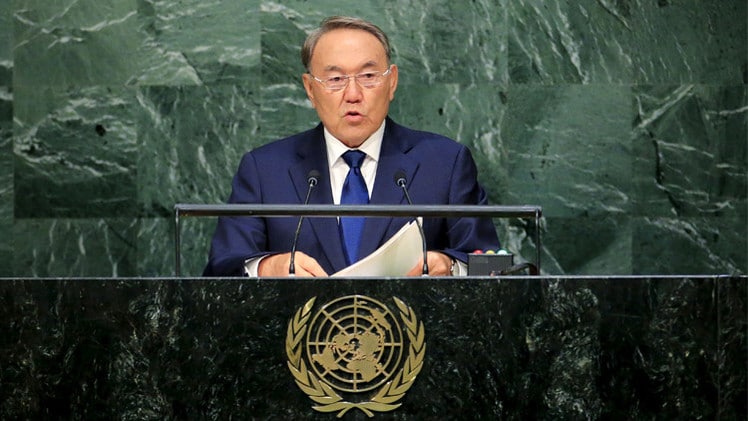 On June 18, 2009, at a ceremonial event dedicated to the 20th anniversary of the cessation of tests at the Semipalatinsk nuclear test site, as well as on July 1, 2009 at the opening of the III Congress of Leaders of World and Traditional Religions, the First President of the Republic of Kazakhstan N.A. Nazarbayev took the initiative to declare August 29 the International Day against nuclear weapons.

After gaining independence in 1991, Kazakhstan renounced the world’s fourth most destructive arsenal of nuclear weapons inherited from the Soviet Union, and on August 29, 1991, closed the largest Semipalatinsk nuclear test site, which became the most significant contribution to strengthening the non-proliferation regime.

As a result of a long process of approval, a draft resolution “International Day against Nuclear Tests” was submitted to the UNGA First Committee. The resolution was co-sponsored by 26 states.

On December 2, 2009, a UN General Assembly resolution was adopted declaring August 29 as the International Day against Nuclear Tests. According to the resolution, events will be held annually to remind the world of the dire consequences of nuclear tests and prevent their resumption in the future. This is the recognition by the international community of the importance of the date of August 29, the day of the official closure of the Semipalatinsk test site, which is of historical importance not only for Kazakhstan, but for all humankind.

The resolution calls on all Member States, the UN system, civil society, academia, the media and individuals to appropriately observe the International Day against Nuclear Testing, including by using all elements of information outreach.

The International Day against Nuclear Tests was first observed in 2010. Since then, this Day has been celebrated every year around the world with various events, including symposia, conferences, exhibitions, competitions, publications, lectures at academic institutions, news broadcasts and other events. The United Nations also hosts events to mark this Day on an annual basis.

On August 26, 2010, Nur-Sultan (back then Astana) hosted a Conference dedicated to the International Day, with the participation of the CTBTO Preparatory Commission Executive Secretary Tibor Toth, the IAEA leadership and other international organizations. As a result, the participants of the Conference adopted a Statement, which especially noted the enormous contribution to the global process of nuclear disarmament and non-proliferation of the First President of Kazakhstan N. Nazarbayev, who made historic decisions to voluntary renounce the possession of nuclear weapons and to close of one of the largest nuclear test sites in the world. The Statement also calls for the early entry into force of the CTBT.

As a result, the participants of the Conference adopted the Astana Declaration. It was recognized that the declaration of August 29 as the International Day against Nuclear Tests would contribute to the goals of nuclear disarmament and non-proliferation, a worldwide ban on nuclear tests and a nuclear-free world.

From the rostrum of the Conference, the First President of Kazakhstan N.A. Nazarbayev announced the launch of the international project “ATOM” (Abolish Testing: Our Mission), and called on the conference participants and all people of goodwill in the world to support the “ATOM” Project by signing an electronic petition to the governments of the world with an appeal to abandon nuclear tests forever. The former head of state again called for the early development and adoption of the Universal Declaration of a Nuclear-Free World.

The goal of the ATOM project is to bring about real, permanent change by rallying people around the world in the fight to finally end nuclear weapons testing and, ultimately, to free the world from nuclear weapons.

As part of the Project, anyone on earth who opposes nuclear weapons can sign an online petition to governments around the world calling for a permanent end to nuclear testing, achieve the early entry into force of the Comprehensive Nuclear Test Ban Treaty, and thus take an important step towards building a world without nuclear threat.

Since the announcement of this initiative, the Project has been presented all over the world, which included exhibitions of paintings by the famous artist, Honorary Ambassador of the ATOM Project Karipbek Kuyukov, who himself is a victim of nuclear tests at the Semipalatinsk test site.

The ATOM project was presented at the Organization for the Prohibition of Chemical Weapons (OPCW) in the Hague; the headquarters of the United Nations office for Europe in Geneva; in the US Senate and research centres in Washington; at the headquarters of the Comprehensive Nuclear-Test-Ban Treaty Organization in Vienna, in Japan (Tokyo, Hiroshima, Nagasaki), in the publishing house of the newspaper “Argumenty i Fakty” in Moscow; at the Konrad Adenauer Foundation in Berlin, as well as in the framework of the special session of the UN General Assembly in New York and international conferences on the humanitarian consequences of nuclear tests in Norway (Oslo), Mexico (Nayarit) and Great Britain (London, Edinburgh).

In 2015, the International Day against Nuclear Tests was celebrated on September 10 at the UN headquarters in the format of an informal meeting in the hall of the Trusteeship Council, convened by the President of the General Assembly, John Ash, with the participation of the High-level Group formed in cooperation with the Permanent Mission of the Republic of Kazakhstan to the UN.

The participants touched upon key issues such as measures for further progress in the field of nuclear disarmament and non-proliferation.

On August 29, 2016, an International Conference “Building a Nuclear Weapon-Free World” was held in Nur-Sultan, within the framework of the initiation of the Global Anti-Nuclear Movement, together with the well-known NGO Parliamentarians for Nuclear Non-Proliferation and Disarmament (PNND). The event was dedicated to the 25th anniversary of the closure of the Semipalatinsk nuclear polygon.

The conference, which brought together the world’s leading parliamentarians, heads of international organizations, mayors, religious leaders, government representatives and experts in the field of nuclear disarmament, stood out for its broad reach, quality of participants and fruitful work.

The conference was attended by representatives from more than 50 countries. As a result of the conference, the Final Document “Vision of Astana: from radioactive haze to a world without nuclear weapons” was adopted.

On August 29, 2017, with the participation of the First President of Kazakhstan N. Nazarbayev and the Director General of the IAEA Y. Amano, the grand opening of the building of the IAEA Low-Enriched Uranium (LEU) Bank took place at the Ulba Metallurgical Plant. By providing its territory for the location of the LEU Bank, Kazakhstan made an additional contribution to strengthening the non-proliferation of weapons of mass destruction and the creation of a completely new mechanism for guaranteed supplies of LEU to the IAEA member states.

On August 29, 2018, Nur-Sultan hosted the International Conference of the Comprehensive Nuclear-Test-Ban Treaty Organization (CTBTO) “Remembering the past, looking into the future.” The event was attended by members of the CTBTO Eminent Persons Group – well-known international figures and activist supporters of the entry into force of the Treaty, as well as the CTBTO Youth Group – young professionals and students from different countries.

For instance, on August 29, 2019, a ceremony of presenting the “Nazarbayev Prize for a world without nuclear weapons and global security” was held in Nur-Sultan. That year’s laureates were Lassina Zerbo, the Executive Secretary of the Comprehensive Nuclear-Test-Ban Treaty Organization (CTBTO), and the late Director General of the International Atomic Energy Agency (IAEA), Yukiya Amano.

The ceremony was attended by representatives of the Amano family – his widow and his brother (Ambassador Mari Amano), as well as other guests of honour – Deputy Director General of the IAEA Mary Alice Hayward, ex-Minister of Foreign Affairs of Italy Franco Frattini, ex-General Director of the OPCW Ahmet Uzumcu, ex-UN Under-Secretary-General for Economic and Social Affairs Sha Zukang, Vice President of NTI, British ex-Defence Minister Desmond Brown, co-chairman of the International Peace Bureau Reiner Brown, and international expert Tariq Rauf.

At the initiative of the Ministry of Foreign Affairs of Kazakhstan, UN Secretary General A. Guterres sent a video message to the participants of the ceremony, in which he noted that a world free of nuclear weapons, including a ban on nuclear tests, remains the most important priority of the United Nations in the field of disarmament. In this regard, the UN Secretary General expressed gratitude to the First President of Kazakhstan Nursultan Nazarbayev for his commitment to this cause and the establishment of this award.

In addition, as part of the initiative to unite the efforts of all states that are part of the nuclear-free zones, and as part of the initiation of the Global Anti-Nuclear Movement, a seminar “Development and strengthening of consultation mechanisms between existing nuclear-weapon-free zones” was organised on August 28-29, 2019, in Nur-Sultan, together with the United Nations Office for Disarmament Affairs (UNODA).

Finally, on August 29, 2019 in New York, the Permanent Representative of Kazakhstan K. Umarov handed over to the United Nations Secretariat the document on ratification of the Treaty on the Prohibition of Nuclear Weapons (NPT).

Thus, the International Day against Nuclear Tests, along with other events and activities, contributes to the formation of a global environment that opens up more optimistic prospects for moving towards a world free of nuclear weapons.

On August 26, 2020, a videoconferencing event will be held, dedicated to the International Day against Nuclear Tests. With the participation of the UN Secretary General A. Guterres and the UN General Assembly President M. Bande, the CTBTO Executive Secretary L. Zerbo plans to officially present the First President of Kazakhstan – Leader of the Nation N. Nazarbayev and the former President of Finland T. Halonen a new unique status – “champions CTBTO “.

The Minister of Foreign Affairs of Kazakhstan M. Tileuberdi will speak at the event on behalf of the Leader of the Nation.

In addition, official videoconferencing events are planned to mark this date in the capitals of the United States and Great Britain.

For instance, on September 2, 2020, in Washington, the American NGOs “Arms Control Association” and the “Centre for Policy Research” (SUNY-Albany) will hold a webinar on the topic “Strengthening the Norm of the Nuclear Test Ban”, with the participation of American and Kazakh experts in the field of nuclear disarmament and non-proliferation.

On September 8, 2020, a webinar will be held in London on the topic “Multilateral Cooperation in the Post-COVID Period – A Chance to Achieve a Nuclear-Weapon-Free World.” The event will be attended by the Parliamentary Under Secretary of State (Minister for European Neighbourhood and the Americas) of the United Kingdom W. Morton, Executive Secretary of the CTBTO L. Zerbo, Director General of the UN Office in Geneva T. Valovaya, Deputy Minister of Foreign Affairs of Kazakhstan E Ashikbaev, and others.