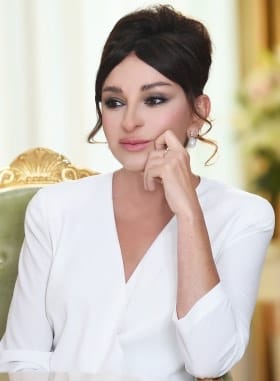 Direct involvement in the development of modern and independent Azerbaijan, solution of social issues, adherence to the ideas of mercy and morality, a constant desire to extend a helping hand and to do good… All these form the backbone of the life philosophy of the First Vice-President of the Republic of Azerbaijan, President of the Heydar Aliyev Foundation, UNESCO and ISESCO Goodwill Ambassador Mehriban Aliyeva. Working side by side with President Ilham Aliyev, his life companion and closest ally Mehriban Aliyeva is making a great contribution to the dynamic development of the country.
Mehriban Aliyeva has successfully led the Heydar Aliyev Foundation for 16 years. The revival and expansion of the charity traditions of the Azerbaijani people became possible thanks to the personal example of the President of the Heydar Aliyev Foundation.
For 16 years, Mehriban Aliyeva has honorably carried out the mission of the UNESCO Goodwill Ambassador. Being at the same time the Goodwill Ambassador of ISESCO, she is tirelessly involved in activities to inform the world public about the historical and cultural heritage of Azerbaijan, the realities of the country. The UNESCO World Heritage List includes Icherisheher with its Palace of Shirvanshahs and Maidens Tower, the rock paintings of Gobustan, and the Palace of Sheki Khans along with the historical center of Sheki. The UNESCO Representative List of Intangible Cultural Heritage also includes mugham and the ashug art — the masterpieces of our musical treasury, the production and the art of performing on the stringed musical instrument kamancha, the heritage of the Dada Gorgud epic, and the art of the Azerbaijani headscarf kalagayi. Finally, in July 2019, the 43rd session of the UNESCO World Heritage Committee was successfully held in Azerbaijan.
Mehriban Aliyevas appointment as First Vice-President of Azerbaijan on 21 February 2017 is regarded as the logical outcome of her substantive activities and organizational skills. Over the past period, she has fully justified the Presidents and the peoples confidence in her with the work she has carried out in this senior and responsible position.
A special place in Mehriban Aliyevas activities belongs to the solution of problems of vulnerable segments of the population, in particular the internally displaced persons. She devoted the first meeting as First Vice-President to the issue of relocation of refugee and IDP families temporarily housed in hostels in Baku and Sumgayit. Immediately after the meeting, an action plan was prepared and tangible work began. In a short period of time, housing conditions of 300,000 refugees and internally displaced persons were improved. Last year, another 5,923 IDP families were moved to new apartments and a further 2,227 families of this category were housed in the first quarter of 2019.
On the instruction of First Vice-President Mehriban Aliyeva, a group of soldiers and officers who undermined their health in the April battles were provided with high-tech prostheses.
The programs “Development of Orphanages and Boarding Schools”, “New Schools for a Renewing Azerbaijan”, “Support for Education”, “Development of Preschool Education Institutions” and other programs implemented on Mehriban Aliyevas initiative have played an important part in the development of education. Within the framework of the “New Schools for a Renewing Azerbaijan” program launched in 2005, up to 500 school buildings were constructed and reconstructed, providing education to more than 100,000 pupils. Up to 40 kindergartens have been overhauled as part of the “Development of Orphanages and Boarding Schools” program.
As far as the issue of public health is concerned, such exceptional projects and charity programs being implemented on Mehriban Aliyevas initiative as “Caring for Diabetic Children”, “In the Name of Life Without Thalassemia” and “Reconstruction and Construction of Medical Facilities” are met with great enthusiasm. Within the framework of these projects, a modern Thalassemia Center, Rehabilitation Center of Persons with Down Syndrome, Rehabilitation Center for Persons in Need of Special Care, a Surgery and Organ Transplantation Center at the Central Oil Workers Hospital, a Children’s Psycho-Neurological Center and other healthcare facilities have been built or refurbished. It is noteworthy that this activity is not limited to Baku and the regions of Azerbaijan. Of course, should be noted the huge role of Mehriban Aliyeva in the fight against the pandemic of 2020 COVID-19. Mrs Mehriban Aliyeva personally controlled the treatment of those infected with the virus. With the support of the Heydar Aliyev Foundation and Mehriban Aliyeva personally, modular hospitals were built for patients with coronavirus, numerous medical supplies were delivered from foreign countries for treatment.
Consistent and focused work is under way on the initiative of Mehriban Aliyeva to communicate the truth about the Armenia-Azerbaijan Nagorno-Karabakh conflict, our culture, history and traditions of statehood to the international community. Exhibitions, days of culture and other events are organized in reputable international organizations and various countries around the world. As an example of this, can be mentioned the holding of days of Azerbaijani culture at the headquarters of the European Parliament, in Athens, in Cannes, the opening of the Center of Azerbaijani Culture in Paris, the erection of monuments to outstanding personalities of our people in various cities of the world.
The international Eurovision song contest, the inaugural European Games, The 4th Islamic Solidarity Games and 37th FIG Rhythmic Gymnastics World Championship successfully held in our country in recent years have revealed Mehriban Aliyevas exceptional organizational skills. These successes of Azerbaijan have delighted the world.
The multifaceted charity activities of Mehriban Aliyeva are highly appreciated both in Azerbaijan and internationally. The Heydar Aliyev Order, the highest award of the Azerbaijani state, the highest order of the European Olympic Committees, the Order of the Legion of Honor of France, Knight Grand Cross of the Order of Merit of Italy, Grand Commander’s Cross of the Order of Merit of Poland, the Order of Friendship of Russia, UNESCO Golden Mozart Medal… And this is not a complete list of awards the First Vice-President of Azerbaijan has received.

The 29th anniversary of Kazakhstan’s Renunciation of Nuclear Weapons