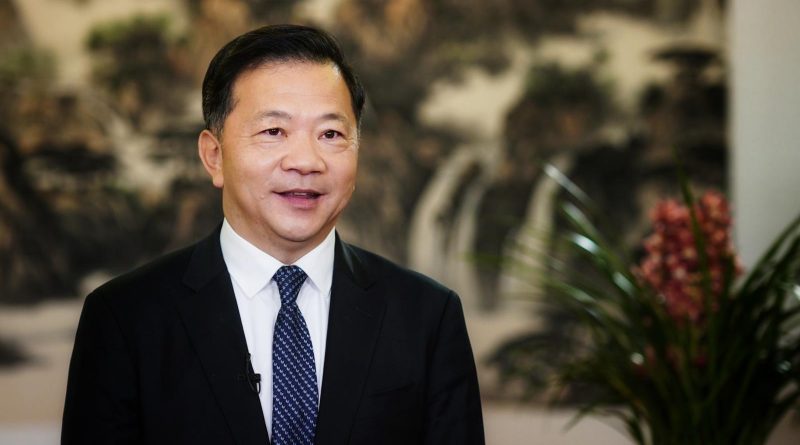 In his speech on the occasion of the New Year, Shen Hai Xiong, Chairman of China Media Group said:

“China loves all, 2020 is a number that means blessings and happiness, according to Chinese pronunciation it means “love you, love you”. Relations with the UAE are “exceptional” and “strategic” as the most important partner in the Middle East. Interviewing Sheikh Mohammed bin Rashid was one of the most important achievements in 2019

In his speech on the first day of January 2020 to audiences around the world through Radio China International on the occasion of New Year’s Day, he said that 2020 is a number that carries blessings and happiness, and as Chinese internet users say the pronunciation of this number means (love you, love you). On the occasion of the New Year, I present to you from Beijing on behalf of the China Media Group, the best wishes for the New Year.

He added that the year 2020 is intended in achieving the construction of a well-off society in a comprehensive way in China, where the country with 1.4 billion people will achieve complete elimination of extreme poverty which is unparalleled in human history. China Media Group will continue to document events and provide more stories on the current happenings in China and the world for friends with professional standards committed to seeking more accuracy and perfection, pumping more positive energy in building a society of the common destiny of humanity. The United Arab Emirates shared this vision and we had an exceptional and strategic relationship with them during 2019, we hope this relationship lasts for a long time with the most important partner for us in the Middle East.

He pointed out that the Chinese Media Group conducted an interview with His Highness Sheikh Mohammed bin Rashid Al Maktoum, Vice President of the UAE and Prime Minister and Ruler of Dubai, this was one of the most important achievements in 2019.

He added that human history has continuous moments; many moments in 2019 have become immortal memories. On 1st of October, we held a huge celebration for the 70th anniversary of the founding of the People’s Republic of China, friends witnessed visual and audio masterpieces through the products of China Media Group in multiple languages, such as the documentary “We are on the Right Track” and “The Great Military Show 2019” film with 4K high-definition direct broadcast technology, and they shared with us the extraordinary march of (New China) over 70 years. I have received sincere wishes from many friends, among them Mr. Francisco Maringi, expert of Chinese Affairs in Italy, who wrote in his email: “I admire the achievements made by the people of Republic of China in the 70 years since its foundation, and I see that the Chinese people have enough reasons to be proud of these achievements”.

He continued: “During the past year we made great efforts to record all the wonderful moments in the progress of China, and to display the real, three-dimension and comprehensive picture of China in the new era in front of the world. We used the media and advanced technologies such as G + 4K / 8K + AI5 to cover the summit of (Belt and Road Forum) for international cooperation, the “Dialogue of Asian Civilizations Conference”, the 20th anniversary celebration of Macao’s return to the motherland, and other important events. We have launched a series of special films such as “The Ideals Loved by Xi Jin Ping” and “If the Treasures of China Speak”. This opened multiple windows for friends to know in depth about the history of the Ancient China; its culture, values ​​and concepts in the new era. We also launched a series of events for followers around the world entitled (Come on with China), and creative events on the mass media (Fun Chinese-Russian Exchanges) and (Stars on the Internet) in multiple languages, which made more Friends (Fond of China)”.

He added further: “It has only been two years since the founding of the China Media Group, but we realize that the lack of progress in the current Internet age means deterioration, and slow progress also means deterioration. We always remember President Xi Jin Ping’s recommendations (adhering to the basic principles, creativity and mastery of building media outlets, new platforms and operating them). We are committed to leading creativity and accelerating progress towards the major international media in the first place. During this year we launched the only and important national laboratory for high-definition video and audio recordings; production and broadcasting, we focused all efforts on building a new media platform with the fifth generation technology at the national level (Yangshipin), we started the comprehensive reform of the high-quality development to launch more than 200 wonderful programs to serve our followers. “

Shen Hai Xiong said that the comprehensive, neutral and fair coverage of hotspots in the world are standards that we always adhere to; China Media Group, as the world’s largest media organization, maintains openness and cooperation to conduct exchanges with colleagues in the media sector inside and outside China on an equal basis. Throughout the year, I held talks and exchanges with global media officials from more than 150 countries, such as the Associated Press, Reuters, France Press and BBC, as our mutual consensus increased, and the circle of friends expanded continuously.

Chairman of the China Media Group added: “However, I have noted with regret that some of the powerful media outlets do not adopt a neutral stance in some of their reports on China, until they have spread some rumors as reliable news and lost their credibility, and their news has become a literary fiction. We all believe that facts are the life of news reports, and if we cover according to our perceptions and write reports as if we are writing a fictional novel, this will affect any media resource that does this work whatever it is. All media officials who adhere to professional journalism, should pay attention to this point and avoid falling into it.”

In his speech, he said: “The British writer William Hazlet (1778-1830) once said: “intolerance and inequity is an inevitable consequence of ignorance”, so seeking truth and eliminating prejudice has become very precious in light of the complex and changing international situations, and the China Media Group will continue adhering to impartiality and justice to spread the facts and bring the voice of justice to the international community.

“There is no geographical distance between friends, and we are neighbors even if we are a long distance between us” said Chinese poet Zhang Jiuling of the Tang Dynasty. Based on this, our coexistence on this same planet is destiny and fate. When I visited Brazil and Argentina I saw jacaranda trees and bougainvillea flowers, the same as those in Guangdong Province, where I worked, and I heard the same bird song. Also, on my visit to Italy and Spain I tasted with my colleagues working in media, glutinous rice wine and steaks, which are similar to things found in my hometown of Zhejiang Province. Yes, the concept of “the world as a small village” has become so real! and the inhabitants of this village must exchange, interact and mix. I remain confident that media exchanges have a role in removing barriers, eliminating bias, and turning more strangers into close friends.

Xiong concluded: “We hope that love will permeate human community in 2020. We wish China and the world goodness and blessings.”