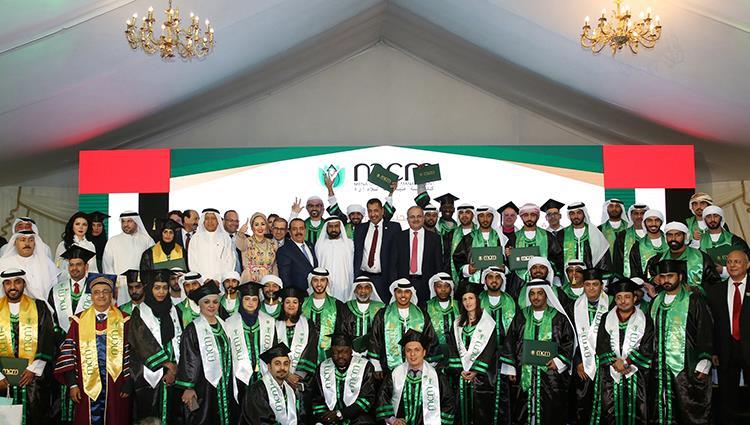 Under the patronage of His Highness Sheikh Hamdan Bin Rashid Al Maktoum, Deputy Ruler of Dubai and Minister of Finance, the MENA College of Management (MCM) in Dubai has celebrated the graduation of the first batch of its students at its headquarters in Al Safa 1 area in Jumeirah, Dubai.

It was also attended by Mr. Salim Ahmad al Qaisi One of the major co-founders and shareholders, vice president board of trustees and dignitaries and members of the MCM’s Board of Trustees and Board of Partners. Two delegations representing France’s EM Normandie, strategic partner, and Jordan’s Jadara University as well as the families of the graduates also attended the ceremony.

The ceremony began with a parade of over 60 male and female graduates from the human resources management and hospitality management programs, these being two out of four academic programs approved by the Commission for Academic Accreditation at the UAE Ministry of Education.

The UAE national anthem was then played and was followed by the speech of the patron of the ceremony, which was delivered by H.E. Mirza Al Sayegh, Director of the Office of His Highness Sheikh Hamdan Bin Rashid Al Maktoum, Deputy Ruler of Dubai and Minister of Finance, who is also HH Sheikh Hamdan’s personal representative to the graduation ceremony.

In his speech Al Sayegh congratulated the graduates and the MCM officers and thanked them for their academic achievements, stressing that this is the future challenge for nations to develop and achieve progress. He also urged them to resume their academic career paths in the higher studies.

Later, President Prof. Nabil Hassen El Kadhi, PhD, delivered a speech in which he spoke about the MCM stages of development, particularly the MCM’s launch of a two-year full-scale digital transformation plan and the Youth Creativity, Leadership and Entrepreneurship Club based on its belief in its social role, UAE Vision 2021 and the preparations for receiving the next 50 years. To this effect, a strategic partnership serving the future plans was announced with the Canadian Future City Council, he said.

The graduation ceremony featured several parts including a welcome poem delivered by student poet Saeed Bin Salama Al Ameri, followed by a film on the UAE’s celebrations of its 48th National Day as part of the MCM’s celebrations of this event and the progress achieved by the higher education sector. This was followed by heritage dances performed by the Al Ayyala group.

The student graduation speech was delivered by graduate student Mohammed Juma Al Ali, who expressed the graduates’ gratitude to the MCM and its academic and administrative cadres for the excellent education and training they had received. In the name of the graduates, he reiterated the pledge to serve the country and follow in the footsteps and directives of the wise leadership.

The attendees then watched a film on the MCM showing its stages of development, achievements and future vision in a way that would serve the labor market and its needs.

It was now high time that the graduates were honored beginning with the top achievers. H.E. Mirza Al Sayegh, representative of the patron of the ceremony, , Mr. Salim Ahmad Salem Al Qaisi, Vice Chairman of the Board of Trustees, Prof. Nabil El Kadhi, MCM President, Prof. Bruce Taylor, Executive Director of Development Planning and Quality Assurance, Dr. Skander Slim, MCM’s Academic Dean, and Prof. Mohammed Al Meshnib, Director of Admission and Registration Department, were invited to hand the graduation certificates over to the MCM graduates as per their majors and honor the delegation members of the EM Normandie and Jadara University.

The MCM academic and administrative cadres as well as H.E. Mirza Al Sayegh were also honored. The gift of the patron of the ceremony was then presented and the ceremony concluded with a group photo of the graduates.