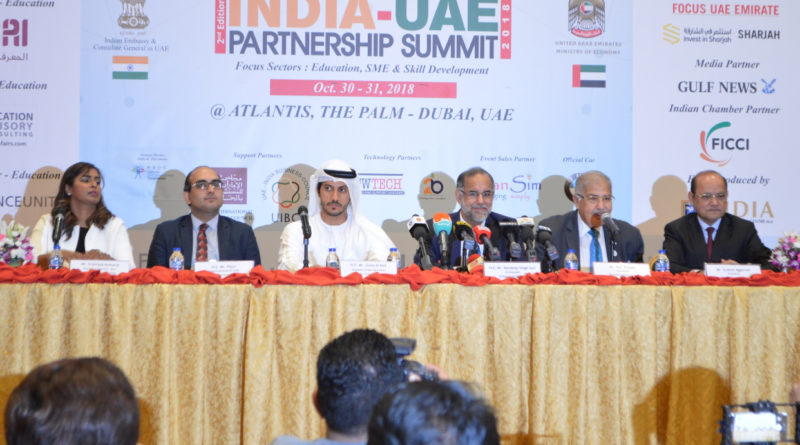 Indian economy, which registered 8.2 percent growth in the first quarter of 2018-19 fiscal year – the highest in recent history – is expected to attract large-scale investment from the GCC to India, following the recent announcement of the development of a US$44 billion oil refinery to be built by Abu Dhabi National Oil Company (ADNOC), Saudi Aramco and Indian counterparts.

The announcement comes a few months after Emirates Group announced a US$4.23 billion (INR300 billion) aircraft maintenance, repair and overhaul (MRO) project in Andhra Pradesh in February this year.

Although these projects will take years to take shape, they reflect a growing investment appetite by Gulf investors in to India’s growing economy.

“We are delighted to support the 2nd IUPS being organised by BLF. Its objectives and agenda fit perfectly into our own efforts to promote the strategic partnership between India and UAE,” H.E. Navdeep Singh Suri, Ambassador of India to the UAE, says.

“We are working with major UAE entities like Abu Dhabi Investment Authority (ADIA), Mubadala and Abu Dhabi National Oil Company (ADNOC), with leading companies like DP World and Emaar Properties and also with some of the top NRI-owned business groups to promote investment into India.

“I am confident that this Summit will be an important step in encouraging investments into specific sectors and projects being promoted by the participating states.”

Foreign Direct Investment (FDI) in India increased to US$61.96 billion in 2017-18, according to Indian Government’s Department of Industrial Policy and Promotion (DIPP). Total FDI reached US$ 61.96 billion in the last four years, it said.

H.E. Juma Al Kait, Assistant Under-secretary of the UAE Ministry of Economy, said, “The India-UAE Partnership Summit (IUPS) provides a unique platform to highlight investment potentials in India and the UAE and create awareness among investors, about these opportunities.

“Over the years, India and the UAE have forged strong bilateral ties, with focus on key sectors like energy, construction, aviation and SMEs. IUPS will explore the possibilities of deeper cooperation in sectors of mutual interest, like hydrocarbon, civil aviation, maritime, renewable energy, space and exploration, to name a few.”

Meanwhile, two-way trade between the two countries is expected to cross US$100 billion a year by 2020, according to recent reports.

Mr Vipul, Consul General of India, says, “I am happy that the second edition of India-UAE Partnership Summit (IUPS) is being organized by BLF this year in partnership with the Consulate. BLF did a good job in not treating the IUPS as a standalone meeting but following up on the discussions at the first IUPS in the past 12 months.

“They maintained touch, for example, with the Government of Andhra Pradesh and also signed an MoU with them and also kept meeting delegations from other States and Ministries visiting UAE. This year the IUPS is focusing on the two important sectors of education and SMEs. I am happy that at least four Indian States have already confirmed their participation in the Summit.

“Our trade and investment relationship with UAE continues to prosper under the visionary leadership of both countries and the discussions at IUPS will again showcase that strong relationship. I am sure that this year’s IUPS will be a bigger success than last year and connect the government and business communities of both countries to forge new partnerships.”

Business Leaders Forum (BLF) was formally launched in March 2017 and has been set up under the direct guidance of the UAE Ministry of Economy, Embassy of India and Consulate General of India with India Trade & Exhibition Centre (ITEC) acting as the official Secretariat of BLF.

Dr Ram Buxani, President of the BLF, said, “We are witnessing a new era in the economic growth of India as well as the India-UAE relationship and investment landscape marked by high-level strategic cooperation.

“I am particularly glad to see that the private sector has responded well to the government’s initiatives to strengthen ties between the two countries at the government-to-government level, by strengthening business-to-business cooperation.”

In August 2018, Business Leaders Forum has signed a Memorandum of Understanding (MoU) with the Andhra Pradesh State Government to develop two islands and build a mixed-use master-planned community with an 18-hole championship golf course, a luxury resort, a villa community, residential and commercial properties where people could live, work and enjoy quality of life. The project will be spread across a landmass of 500 acres split in to two islands to be connected with a bridge on Amravati River with an investment outlay of INR100 billion (U$1.41 billion).

Sudesh Aggarwal, Board Member of the BLF, Chairman of the IUPS Organising Committee and Chairman of India Trade and Exhibition Centre (ITEC), said, “Last year, we announced the creation of an Emirati Investors’ Group to generate funds for investing in state-sponsored big-ticket projects that will be offered to us by invitation only and we also said that we will be investing US$1 billion.

“Today I am proud to announce that we have raised the investment outlay to exceed US$1.41 billion (INR100 billion) in a major project in India – which sets a benchmark for such large-scale club investment by members of a business community.

“However, this is just the beginning of a long journey for us and this falls in line with the headline objective of the governments of India and the UAE and the shared vision. We are extremely proud of our achievements and excited in the future course of our shared journey.”

The UAE is the 10th largest FDI source market for India with cumulative FDI reaching US$4.76 billion in the last 17 years from April 2000 till March 2017.

Invest India, the foreign investment promotion body of India, said it will attract US$100 billion foreign investment in the country, of which US$85 billion has already been committed by 600 large businesses that will create 700,000 jobs, according to recent reports.

The high-level and high-powered IUPS is split into a number of brainstorming business sessions and panel discussions on hot topics, while ministers of five Indian states – Andhra Pradesh, Assam, Kerala, Puducherry, Punjab and West Bengal – will present investment opportunities in key projects within the states and seek investment from potential partners in the UAE.

The emirates of Abu Dhabi and Sharjah are joining the IUPS as focussed Emirates of the UAE to showcase their projects to Indian investors.

Sripriyaa Kumaria, Secretary-General of the Business Leaders Forum and Director-General of ITEC, said, “We are pleased to welcome the emirates of Abu Dhabi and Sharjah in partnering with us at this prestigious event that will help us to gradually bring all the states of India and the UAE closer and create a state-to-state cooperation platform, in addition to the G2G and B2B platforms – which will take the relationship of the two countries to a completely different level.

“I am glad to announce that IUPS 2018 will feature five major Focus States and will be represented by a high level delegation of ministers and senior officials. Andhra Pradesh, Assam, Kerala, Puducherry, Punjab and West Bengal shall showcase sector specific investment opportunities from their states.

“The IUPS 2018 shall also focus on Education and Placement of Skilled Manpower from India to UAE. In the last two decades, India has firmly established itself on the global radar, as it transits to a knowledge-based economy where participation of the industry and other stakeholders to promote quality higher education and research assumes great significance.

“India today boasts of being the largest provider of higher education in the world in terms of institutions (840 universities and 51,000 colleges) and second largest in terms of student enrolment (34.5 million with a GER of 24.5 percent). More than 150 delegates and 20 big players from the Indian education sector shall participate in IUPS 2018, looking to foray into the UAE education market.”

IUPS 2018 will represent a new dawn in the multifaceted investment relationship in education between the two countries by sustained efforts to constantly engage the key stakeholders, government authorities and investors for creating synergies to collaborate and strengthening the flow of two-way investments in education.

The Summit – along with Investment Expo – will deliberate about how important projects in India could be financed and executed with the participation of the local business houses of UAE. This year’s focus will be on Education and SME sectors.